Masonry suport (Consoles) are a stainless steel  system of angles based on special bracets, used to support elevations in horizontal locations of dilatation, long or corner lintels or where there is no foundation for the façade wall. The standard console consists of an angle mounted on one or several bracets. Bracets have different shapes and overhangs matched each time to the structure of the building and are produced in various shapes and overhangs. Our technical office each time adapts them to the construction solutions prevailing at a given facility in such a way as to optimize the costs of mounting the façade. 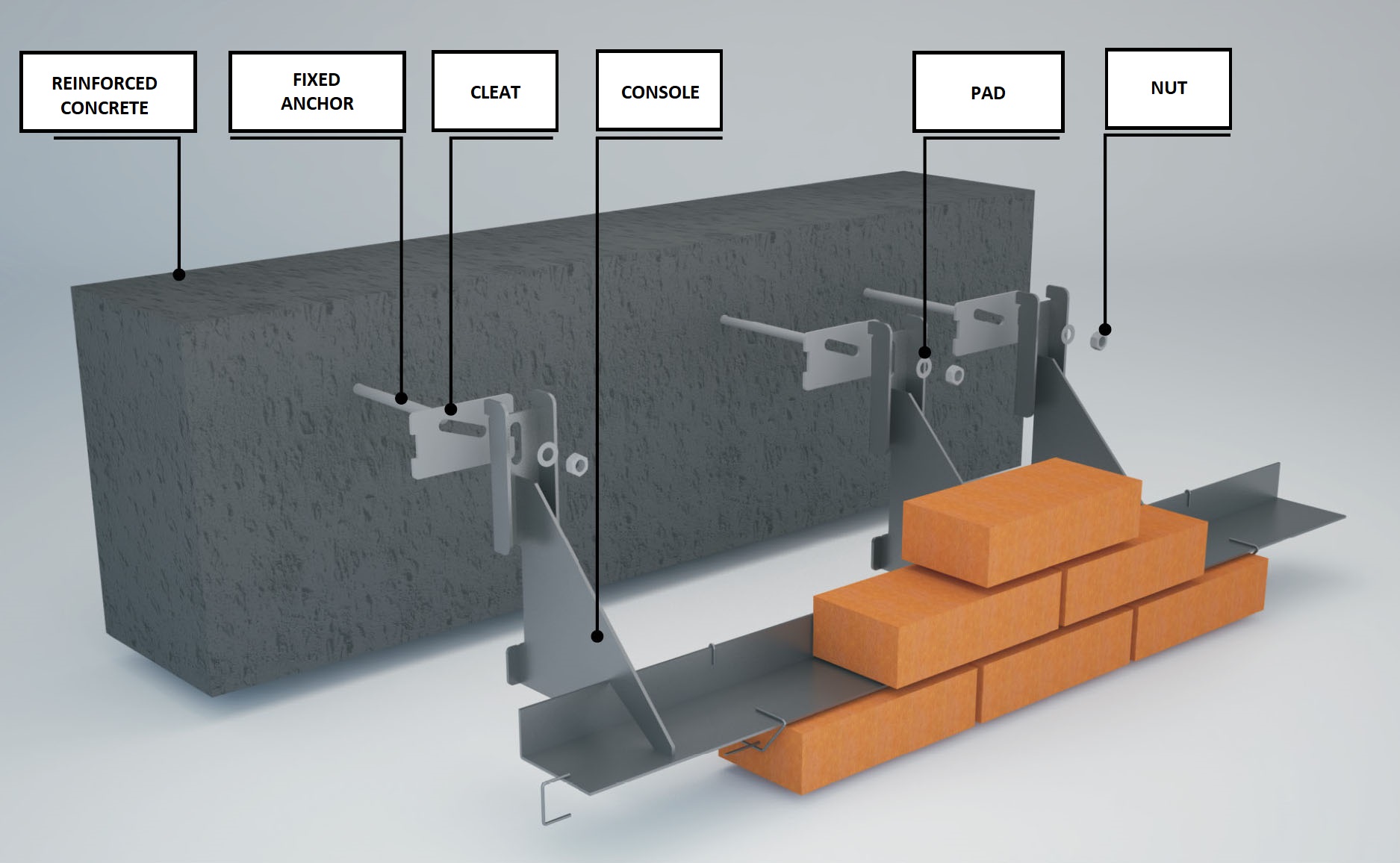 NOTE: The special shape of bracets practically eliminate thermal bridges during façade assembly to the building’s structure. It also allows to a large extent to minimize the effects of irregular reinforced concrete. Lintels on consoles are used in the following cases:

– in long openings with a high wall shield,

– in levels where horizontal dilation is carried out,

– in elevations made of half-brick. 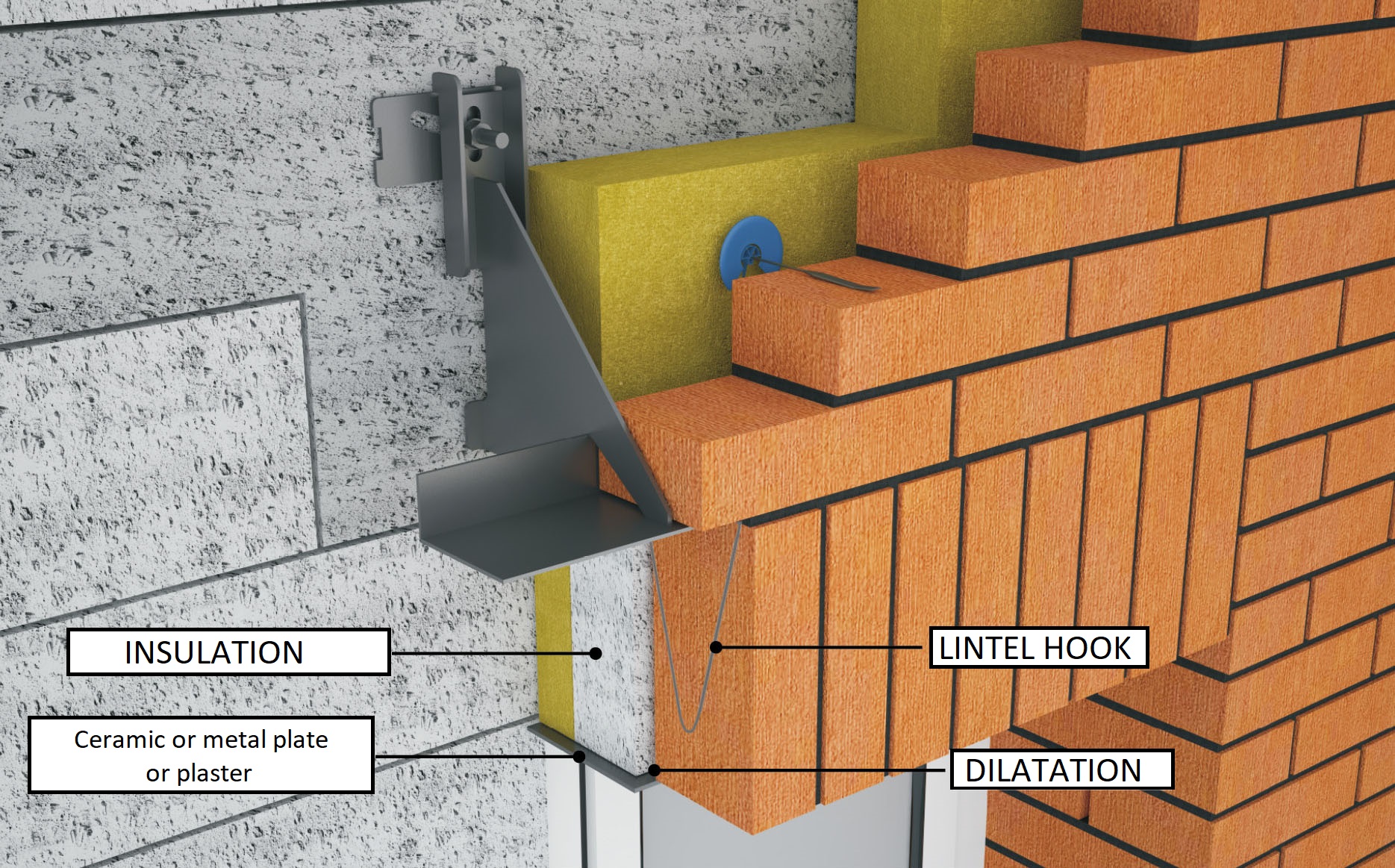 Stainless steel linel hooks are necessary for lintels on consoles or angles. Depending on the method of laying the brick in the first layer, the appropriate type of lintel hooks is used.

Below are the most popular types of consoles with cross-sections illustrating their use. Division due to the shape of the bracet:

Due to the number of bracets: 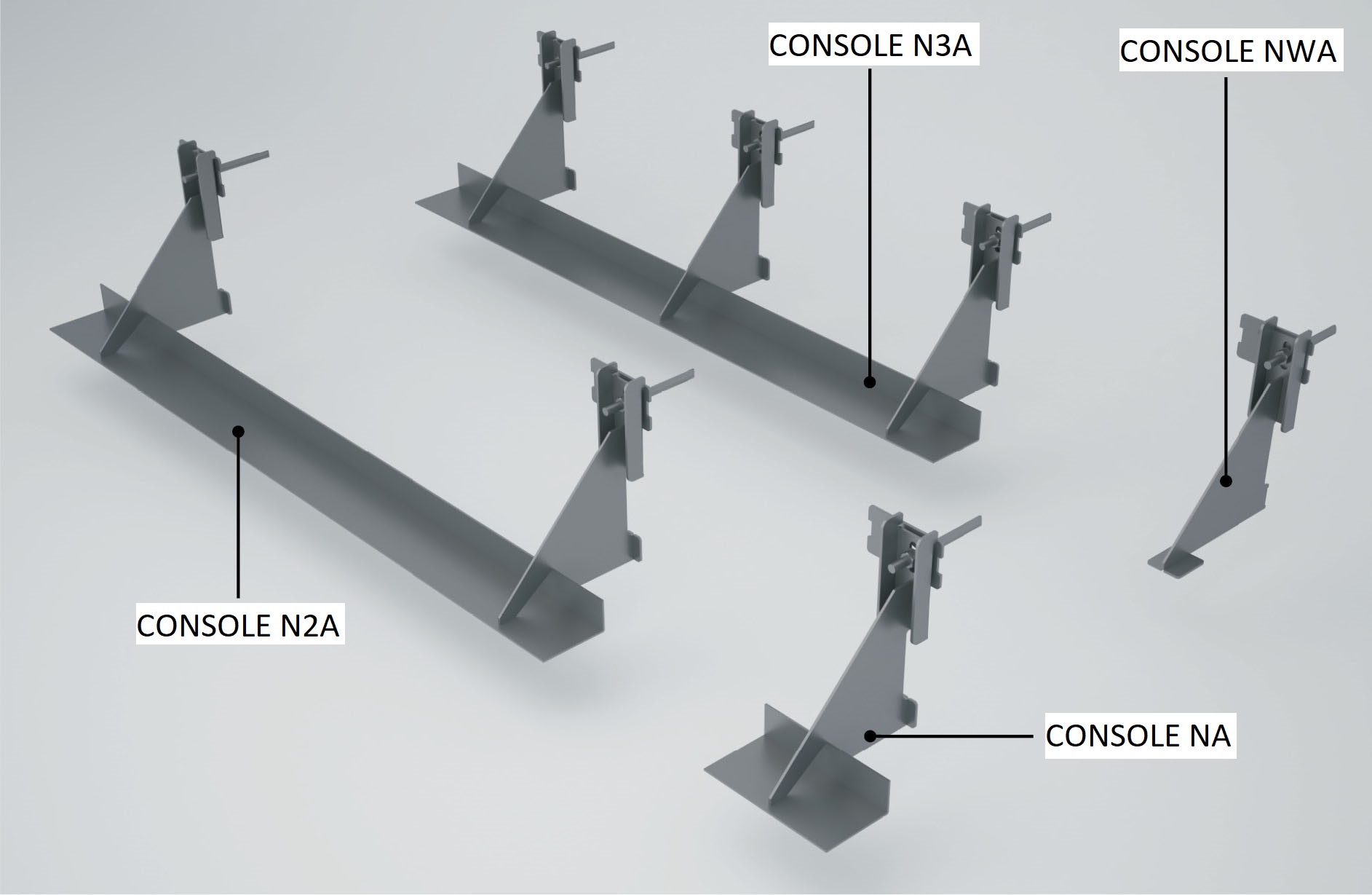 Requirements for the construction of the building

Consoles are usually fastened to reinforced concrete in the building structure with bonded anchors or mechanical expansion bolts. Below is a drawing and a table that describe the minimum dimensions for horizontal reinforced concrete structures depending on the class and distance of the consoles. 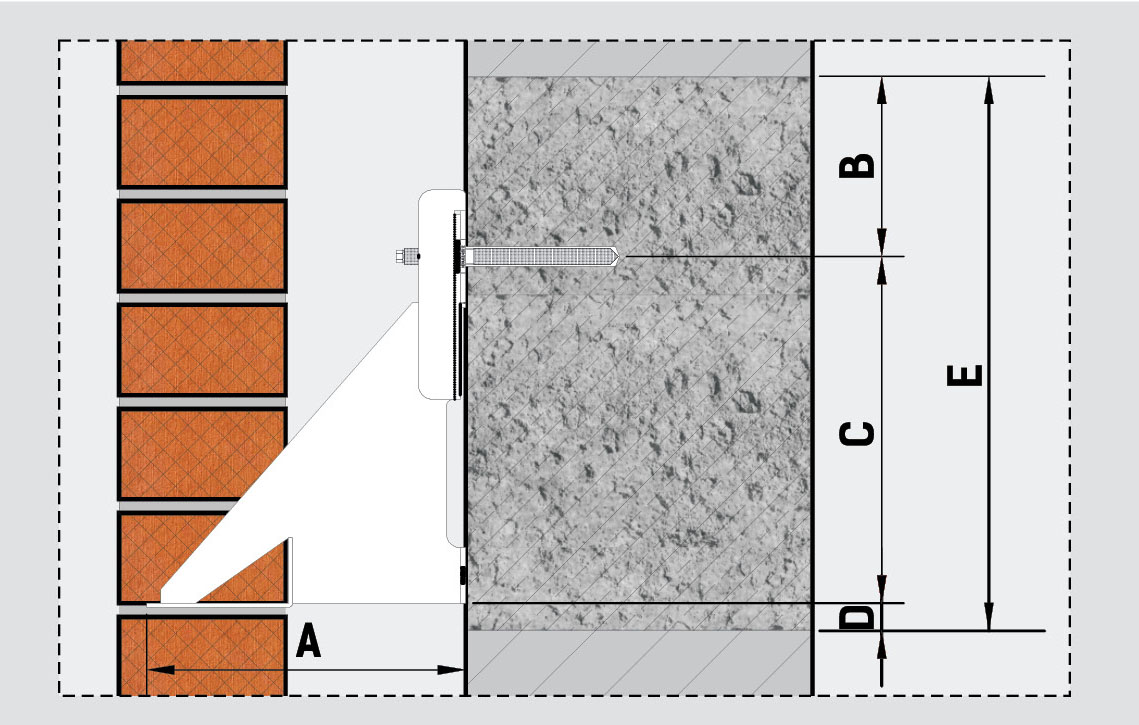 The above reinforced concrete dimensions allow full use of bracets, chemical anchors and full adjustment of consoles. If the construction of the building does not meet the above requirements, reductions in anchors, other types of bracets or additional support – MZ. 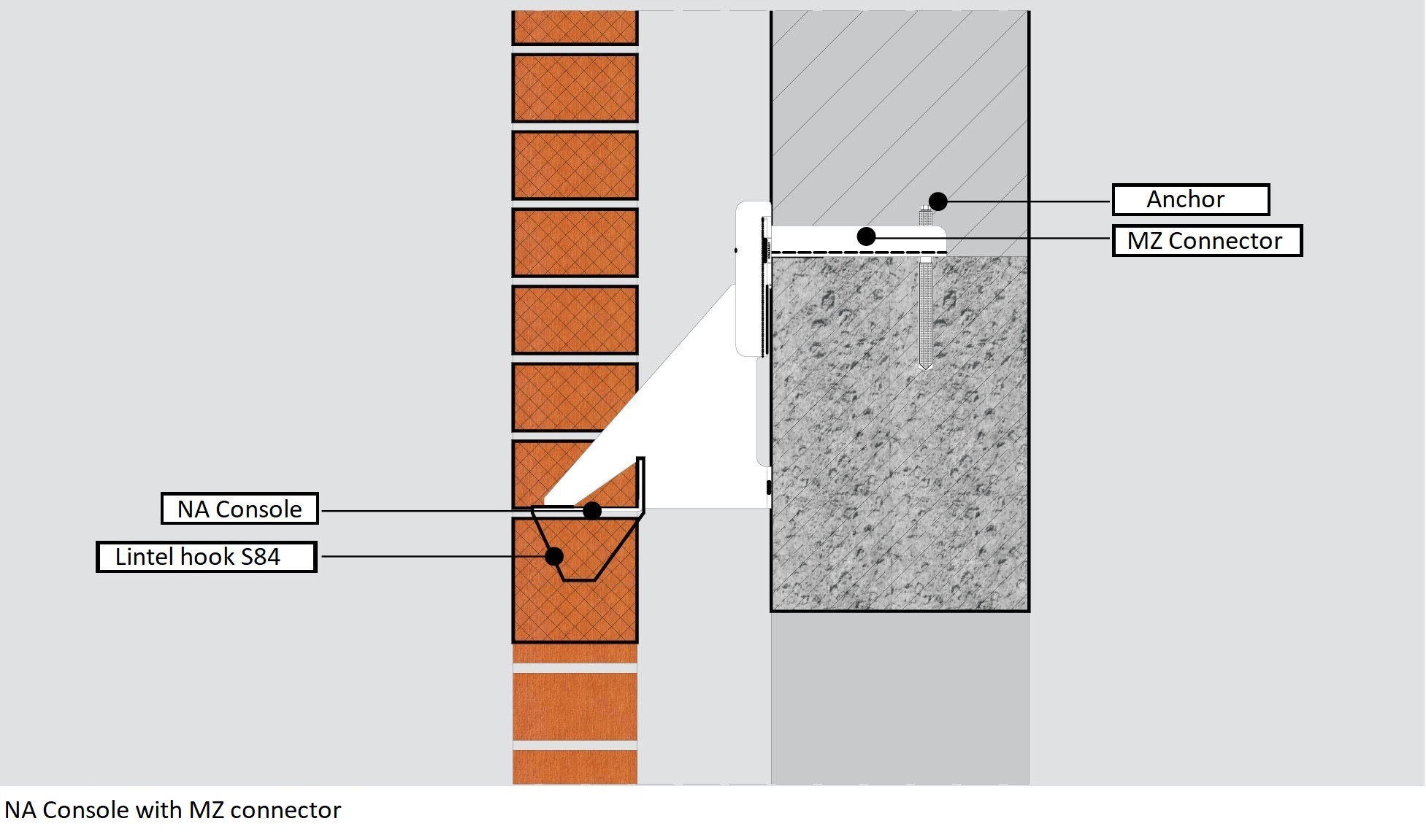 MZ are used in places where the construction of the building does not allow the use of typical bracets, and the contractor does not want to give up the possibility of leveling the consoles. The most common types of MZ are presented below.

All consoles are designed individually, therefore the holes for bonded or mechanical anchors should be drawn according to the design. Special attention should be paid to the lenght from the reinforced concrete edge to center of hole given on plans and lines of the console angle and the distance from it to the axis of the anchor.

Drill hole to the required diameter and depth for stud size being used.

Clean the hole with brush and hand pump at least four times each. It is very important and necessary before installation

Insert capsule into the hole

The stud fixing by rotary-impact method (for example using a hammer drill with a rotational speed of <750 rpm).

The correct anchor should penetrate the concrete to the place marked on its surface (strip without a thread), and the proper mixed adhesive should float slightly and appear on the edge of the hole.

Assembly and leveling of consoles

Place the cleat for leveling on anchors then slide the console bracets on it.

Put a pad on the pin and screw with a nut.

After screwing the console row, they should be leveled by moving the cleats left or right. If necessary, you can turn the cleat 180 degrees.

Note: special attention should be paid to proper support of the console foot on the reinforced concrete – its distance from the edge should be at least 20 mm. Smaller distances are required to be agreed with the NOVA technical office

Assembly of consoles on chemical anchors

After leveling the entire row of consoles, tighten the nuts with the torque appropriate for the given diameter of the anchor.

Assembly of consoles on mechanical anchors

After leveling the entire row of consoles, tighten the nuts to the appropriate torque for the given diameter of the anchor, taking care to properly support the console foot on the reinforced concrete.